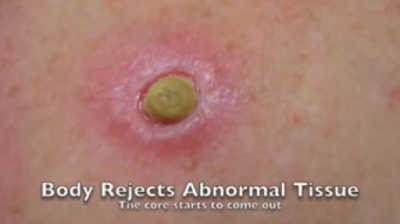 Thank you so much for sending this information.  I am so happy I mentioned Dr. Mohs and I appreciate the story, absolutely incredible.

I didn't tell you this, but I had melanoma about 7 years ago and ONLY because my family was so upset I let a doctor do Mohs on me.  That of course is just how it starts.  Next, of course I was told to go to an oncologist, my husband took me to 5, all said exactly the same thing.  If I didn't start chemo I only had 6 months to one year to live, I refused.  By the way, right after the Mohs surgery I immediately put the black salve on.
The spot leaked for almost 2 weeks, how, why, I had just had Mohs????  I knew why!!

I went to the Gerson satellite clinic in San Diego instead of going to Mexico, they taught me so much.  I did the Gerson diet, bought the recommended press juicer, and took MMS every hour for 13 hours a day and made the recommended juice every hour.  It was so much work, but I wanted to live.  The Black Salve I put on stayed intact for almost three weeks before it feel off.  I told no one, and it was on my back so it was easy to hide.

I, as advised went back after 5 years for a checkup and no cancer.  Every once in a while, not often I get a funny looking mole and I put on the Black Salve.  I know it has saved my life.  Yes, I get craters in my skin, but they always heal and only one is visible, but I would have to point it out for anyone to notice.

I have a few friends that have reluctantly tried Black Salve.  I always tell them not to tell their MD's, but more often than not they cannot help themselves, 100% of the time, they get chewed out by their doctors, it is sad, because this has caused some to not use it and their cancer just keeps spreading.   I have even had a friend die that started out with a Basal cell on his face.  He knew I had just found out I had a melanoma and I tried to get him to use Black Salve.  No he said, "I love my doctor".  It spread all throughout his body and he died, but before he died I went to his 70th birthday party.  I walked up to him, he had to sit he was so sick. He was shocked when he saw how healthy I looked and he commented and asked me how my cancer was doing.  I actually felt guilty saying, it is gone.

I had a lady call me one time, I didn't know her, so I didn't want to help her, I got nervous, was it the FDA,  but she said the name of a doctor I knew so I let her come over.  She only had two months to live. I never told her what to do, just told her what I would do if it was me.  She had a quarter size spot on her breast, but it wasn't breast cancer.  She bought some Black Salve through Best of Earth and put it on.  It was incredibly painful, she had to take pain pills.

Her doctor kept watching her.  She kept sending me pictures.  I have never seen anything like it in my life.  A mass came out of her breast the size of an adult fist, it had purple, yellow, red and black things on it. She said it smelled.  She put a cloth with MMS on it several hours a day. It finally fell off, but it took almost 3 months.  It will be 4 years this August and she is cancer free.  By the way, I also told her to never ever eat any sugar, I understand that has actually now been proven, cancer cannot live without sugar.  People need to do their research, but most don't, they just do what the Doctor (they love so much tells them to do)!!!

Once again, thank you so so much!
-Becky

Just wanted to tell you how excited I am about the black salve bloodroot capsules. My husband was diagnosed with stage 4 advanced prostrate cancer in January. I immediately put him on the capsules. Today we had another blood test and his PSA went from 57 to 13.3  in just 6 weeks. The Dr can’t believe it, thank you!
-Marion

Black salve worked well. Did what it said. I put it on my husbands shoulder where he had a lump after a broken collarbone.  Before we had a bone biopsy. Only to find prostrate cell in collarbone. We would not of found otherwise.
-Sheri

I have been using black salve for nearly 8 years and it has done everything I wanted to clear up my skin cancers. Without it I would have had to spend thousands on surgical treatment. Money I dont have. Thanks for the info!
-Thea

Black Salve with DMSO  works. I did research first, ignored the fake news, and I used the Black Salve with DSMO on several places I suspected were still cancerous after my doctor treated them twice. I also used the After Cream Care. I am very satisfied and no longer concerned.
-Cathy

I have used black salve capsules for last 2 years. Have had very good results with healing bad skin spots.
Have also used black salve balm with excellent results on sun damaged skin that I was told needed to be operated on. Used the salve and gone in 2 weeks. Doctor was impressed, great product.
-Murray in NZ

I have removed many cancers, including melanoma, from myself and members of my family over the years. And many, friends, I have shown how to remove cancers from their skin, and many have taken the salve orally for internal cancers. I have NOT received one report of failure. Nor have I had a failure on myself or family.
-Bill P.

Used the black salve on my neck and side of head. Areas which the MD did biopsy confirming basil cell carcinoma. The salve was applied and it began to remove the cancerous cells forming the eschar. On my neck the first eschar came off on the bandaid. I applied a small amount of salve on a white spot within the wound to confirm I got the root. A few days later another eschar formed and within 3 weeks total time, both began healing up with use of the After Care Cream. I also applied the  salve to my arm on a spot which I felt may have been cancerous. The salve was on the area for about a week and nothing occurred except for a little redness. Thus showing that it was not cancerous. No question....this works.
-GH